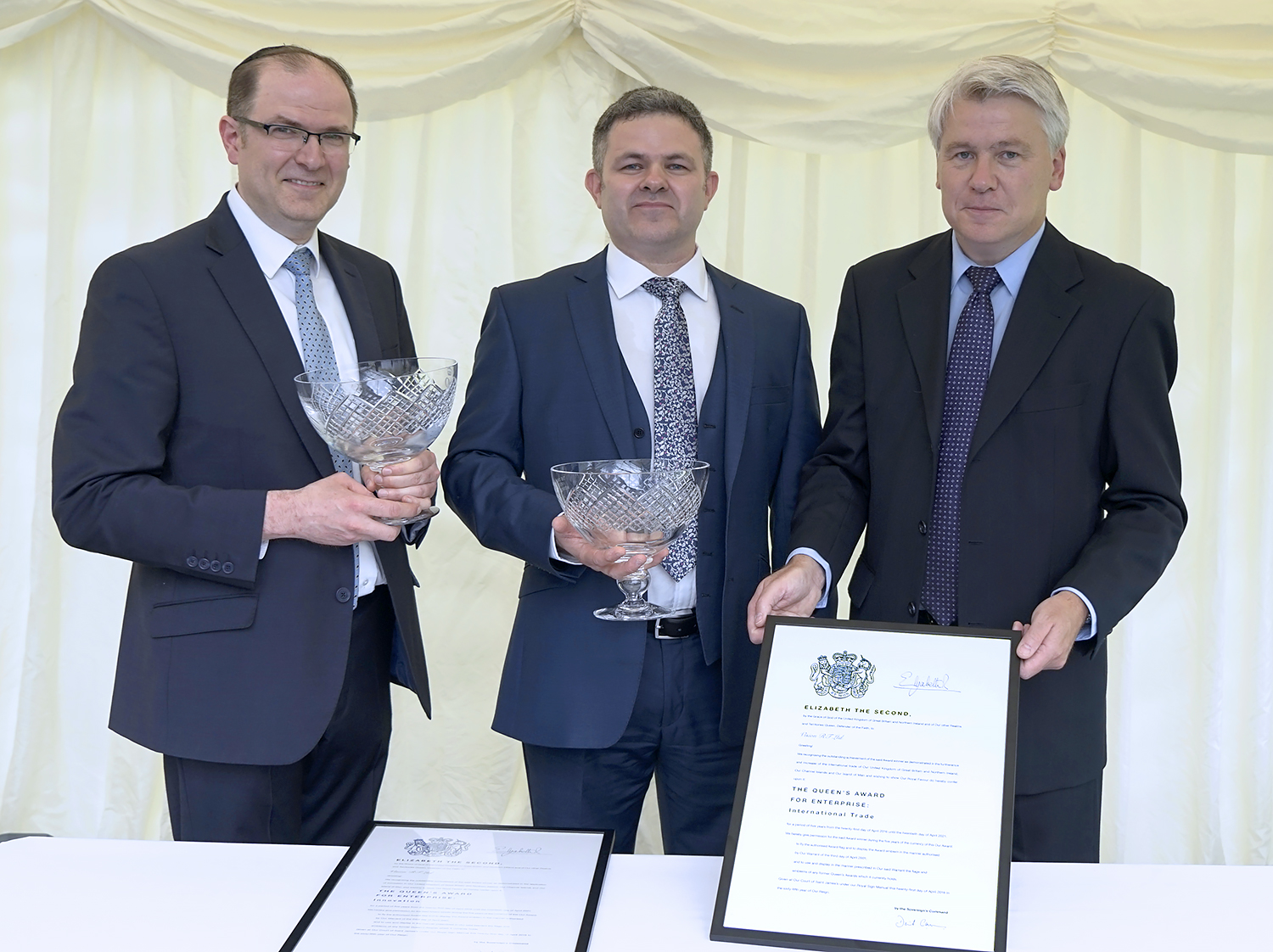 The awards, one for International Trade and one for Innovation, were presented to the company by Leslie Morgan OBE, Deputy Lieutenant of the Greater London Lieutenancy. Vision RT was one of only six British companies to receive two Queens Awards at the Queen’s 90th birthday awards in 2016.

The company was started in 2001 by CEO Dr. Norman Smith in the attic of his parents-in-law, together with CTO Dr. Ivan Meir and Mr Peter Kalms. Initial prototype systems were installed around London and at Massachusetts General Hospital, one of the top cancer centers in the USA.

The success of Vision RT’s technology grew over the next 15 years, with a steadily increasing number of systems being installed worldwide and a “white-label” OEM agreement signed with the world leader in radiation therapy, Varian Medical Systems, in October 2012. Today, over 700 systems using Vision RT’s technology have been sold to cancer clinics around the world, including 37 of the top 50 US hospitals for cancer care*. The company experienced 260% growth in overseas sales between 2013 and 2015, employs over 110 people and rapidly increasing, and has 41 granted** and 37 patents pending in the US, UK, Europe and beyond.

Using Surface Guided Radiotherapy enables the patient to take a deep breath and thereby position the breast so that the heart is spared from any potential radiation damage. With conventional treatments, radiation has been shown to cause cardiac perfusion defects in 27% of patients after six months (Duke study, 104 patients, 2005), but, in a recent UNC Chapel Hill study 20 patients were treated with Align RT and 0% exhibited subsequent cardiac perfusion defects.

“We are extremely proud of what Vision RT has achieved in the past 15 years. From a few engineers with an idea, we have become the global leader in surface guided radiotherapy, a field that is making treatments safer and more comfortable for patients and more economic and efficient for health systems. We are aiming for our technology to become the standard of care and to benefit every patient in every clinic around the world. With rapid clinical adoption and growth of our business in recent years, these are very exciting times for Vision RT.”

Click here to learn more and hear Norman Smith speak about the company and the technology.

“Innovation in Life Sciences is delivering rapid change in how healthcare services are provided around the world. London and the South-East is blessed with world-class, cutting edge companies like Vision RT which are taking giant strides in creating products that offer a step-change in patient care. It was a privilege to meet some of the team from Vision RT and their clinical users and to hear the inspiring story of a patient whose treatment is being delivered through use of their technology during last night’s event.”

Alison Young, a patient who has been a beneficiary of Vision RT’s AlignRT technology at the Harley Street Clinic in London, presented her personal story at the award ceremony and said:

“Being diagnosed with an aggressive type of breast cancer was like being given a death sentence so getting the best type of treatment became my top priority. There are side effects to every treatment and you accept that. But knowing that breath holding, as part of the radiotherapy treatment, would significantly reduce the risk of long term damage to my heart was extremely comforting. The technique from Vision RT made the whole process simple and easy to follow, and reassured me at every step that the radiotherapy was safe for my heart.”

Any cookies that may not be particularly necessary for the website to function and is used specifically to collect user personal data via analytics, ads, other embedded contents are termed as non-necessary cookies. It is mandatory to procure user consent prior to running these cookies on your website.